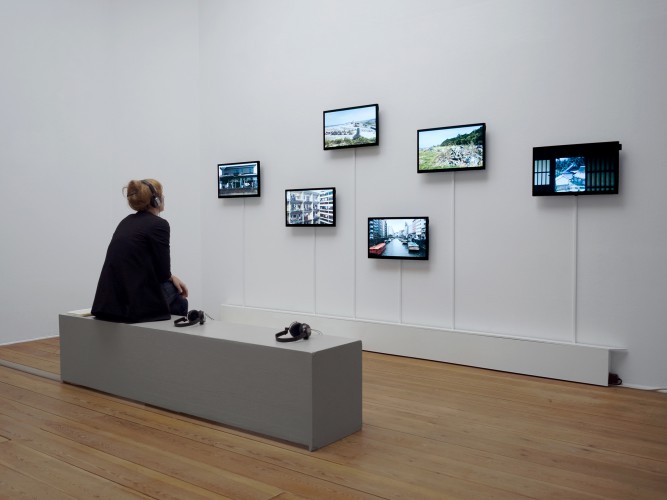 What happens when space is overturned? When the rooms we inhabit are no longer there to inhabit, when familiar space is turned strange? In Japan, space has been overturned a number of times. In 1923, the Great Kanto Earthquake shook Tokyo off its feet. In Hiroshima and Nagasaki, two atom bombs were dropped in August 1945. The same month, in 1974, two homemade bombs were placed at the Mitsubishi headquarters. In 2011, the coast of Japan was irreversibly transformed by a magnitude 9 earthquake followed by giant tsunamis.

Georges Perec tried to invent new ways of describing the world around us. The environments in which we move each day – how can we catch sight of them? ”The daily newspapers speak of everything except the daily”, Perec said, ”the papers bore me, they teach me nothing”. He asked if time had finally come to form our own anthropology, the one which would speak about us? We drive on Route 6 towards the ”forbidden zone” around the Fukushima Daiichi Nuclear Power Plant. The weather is warm and sunny, everything is in bloom. It is contradictory to imagine this place highly contaminated with radiation.

We pass through all the ghost towns with their wrecked and crumbling houses, approaching a school by the seaside where the clock on the façade stopped when the tsunami came. In fact, everything stopped – no children came back to school the next day. Did life move on and start over somewhere else? In Yokohama, I visit an area for day labourers. Some of them used to work at the plants. Wishing to remain anonymous to the world, I turn my camera to the buildings. Concrete, cracks, walls, fences speak for themselves.       –       excerpt from the voice-over

Precarious Spaces, Radiant Days is a six channel HD video installation filmed in the Fukushima region and around Tokyo/Yokohama, Japan, in 2016. It has been made possible through research residencies at Youkobo Art Space, Tokyo (April-May 2016) and the Swedish Institute in Paris (February 2016), as well as through a research trip to Japan in January 2016 funded by Helge Ax:son Johnsons stiftelse. Produced with support from: Association Georges Perec, Paris, IASPIS The Swedish Arts Grants Committee’s International Programme for Visual Artists, Konstnärsnämnden, Uppsala konstmuseum and the artists behind Rummets rymder 1974: Kristina Bength and Cecilia Darle.

“During the spring of 2016 I spent three months in Japan in order to research and film the effects of the 2011 earthquake, tsunami, and nuclear accident in Fukushima, notably on the built environment and on people’s lives. I also enquired the historical background to nuclear power in Japan, in all its complexity and ambiguity, with visits to significant places such as Hiroshima and Fukushima, along with interviews with academics, journalists and artists, and research at the Japan Foundation Library. During my process I received invaluable help and support from a number of independent artists, curators, writers and art initiatives in Japan, along with funding bodies such as the Helge Ax:son Johnson Foundation, The Swedish Arts Grants Committee and The Swedish Institute.

Back in Sweden I developed a six channel video installation for the exhibition ‘Species of Spaces 1974’ at Uppsala Konstmuseum (2016), a text for the anthology ‘Species of Spaces 1974 – An Accommodation of Retained and Forgotten Locations’ (Arvinius + Orfeus, 2016), and a lecture in relation to the exhibition. Through seemingly still video images, I tried to approach the paradoxical feeling of time having stopped at these places, and of traveling through a beautiful, blossoming, landscape, knowing that it is contaminated with radiation. I later developed a one channel film and a performance for the event ‘To Visit, Research and Trace: How to Represent Invisible Spaces’ at Fylkingen in Stockholm (2016) and a three channel video installation and conversation with an archaeologist for a solo exhibition at Vallentuna Kulturhus (2018).”

”Malin Pettersson Öberg has explored her interest in what Georges Perec describes as ”uninhabitable spaces”; places​ affected by environmental disaster or human irresponsibility. Such an unstable and precarious place of today is the evacuation zone surrounding the Japanese nuclear power plant Fukushima Daiichi. Her silent video montages accompanied by a voice-over, emphasize how time has frozen in these places. With the sharp and distanced observations of a voyager, Pettersson Öberg creates associative links between the Mitsubishi headquarters in the financial districts of Tokyo, which was bombed by a revolutionary group in 1974, socially exposed areas inhabited by temporary nuclear power plant workers, and the ”forbidden zone”. The artist asks questions about time, space, transition and representation. In a reflection on the Japanese concept of space, where darkness and light, impermanence and stability, seem to be interchangeable, she quotes Roland Barthes: ”to visit a place for the first time is thereby to begin to write it”.