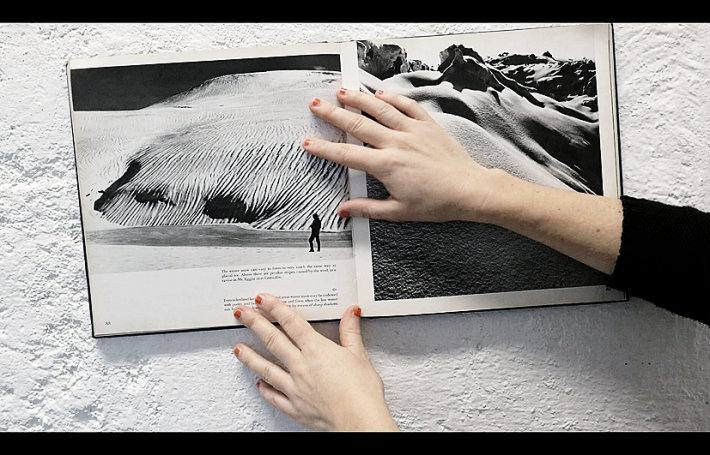 ”In Malin Pettersson Öbergs film Journal of Earth Sciences a story based on the artist’s own journey through Iceland in 2014 is told. In the form of a fragmented narrative her film moves through a mythical Iceland where imageries of origin and nature merge; the movements of Teutonic plates and the geological remains of the glacial age develop into a backdrop for questions of culture and identity. As a story, Iceland is one of the places where an extreme climate, in the form of storms, occasional earthquakes and volcanic activity has an effect on those who live there. The film focuses on this and is permeated by a psychoanalytic narrative that through scientific associations revolves around isolation, travel and exploration. The work becomes a kind of self-reflection that concurrently stages fiction and presents documented material. The desire to discover something raises questions about who owns the story, how much the translator adds and what the viewer projects onto it. There is a passage by Simone de Beauvoir that comes to mind, where she writes how she would like to become the landscape in front of her: ‘I should like to be the landscape which I am contemplating, I should like this sky, this quiet water to think themselves within me, that it might be I whom they express in flesh and bone, and I remain at a distance’, she writes, ‘but it is also by this distance that the sky and the water exist before me. my contemplation is an excruciation only because it is also a joy. I can not appropriate the snow field where I slide. It remains foreign, forbidden, but I take delight in this very effort toward an impossible possession. I experience it as a triumph, not as a defeat’.”

Jonatan Habib Engqvist about the film, in his text Impossible Possession which was written in connection to an exhibition and screening at Slakthusateljéerna and Iaspis – The Swedish Arts Grants Committee’s International Programme for Visual Artists in Stockholm, August 2015.