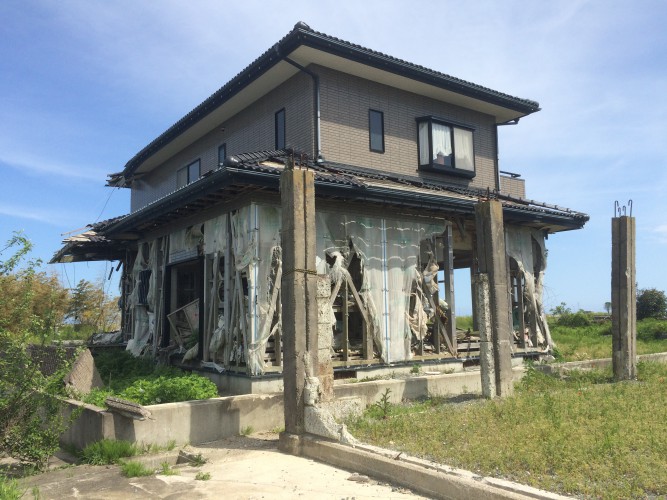 In the radio program Wrapped Words: Listening to Japan Malin Pettersson Öberg is exploring how Japanese artists have been affected by the 3.11 Tohoku earthquake and tsunami, followed by the nuclear disaster in Fukushima in March 2011. Through interviews with Japanese cultural workers recorded during a trip to Japan in January and February 2014 – nearly three years after the accident – Pettersson Öberg investigates issues of identity, appropriation and cultural translations. She asks questions such as: How does the Swedish and Japanese identity relate to one another? Which are our preconceptions of the other culture? How does the various forms of exchanges between the cultures take place? Wrapped Words: Listening to Japan was broadcasted on Tuesday 25th November 2014 between 13.00 – 15.00 from the art space Konsthall C in Hökarängen in southern Stockholm, through Stockholms Närradio (Stockholm Near Radio) frequency 95.3 MHz. It was part of the program series Centrifug Radio Populär, inititated by the artists and directors of the art space, Carina Gunnars and Anna Kindgren.

For the program, Malin Pettersson Öberg has made a selection from the interviews with focus on the nuclear accident and its effects. How do the Japanese artists perceive that the 3.11 affected their lives and surrounding community? In an essayist sound collage, voices and encounters from Malin Pettersson Öberg’s journey are recounted with her own voice. The aim has been to understand more about a sensitive and complex issue, of which Pettersson Öberg is by no means an expert. She approaches the theme as an artist, personally and emotionally, as well as intellectually. The trip and radio program are components in her artistic research project Borrowed Sceneries. Enquiries of Identity and Appropriation, carried out with support from the Swedish Scholarship Foundation for Studies of Japanese Society, the Helge Ax:son Johnson Foundation, Iaspis / The Swedish Arts Grants Committee, the Royal Institute of Art, Konsthall C and Hiroko Tsuchimoto. The project continues in 2015 with a third research trip to Japan in September-October, and the production of a film.

The program is available on Vimeo: https://vimeo.com/120241735. Password required.
Please send an email to malin.pettersson.oberg (a) gmail.com with your request, in order to obtain the password.