Welcome to the opening of the exhibition Massa i rörelse! 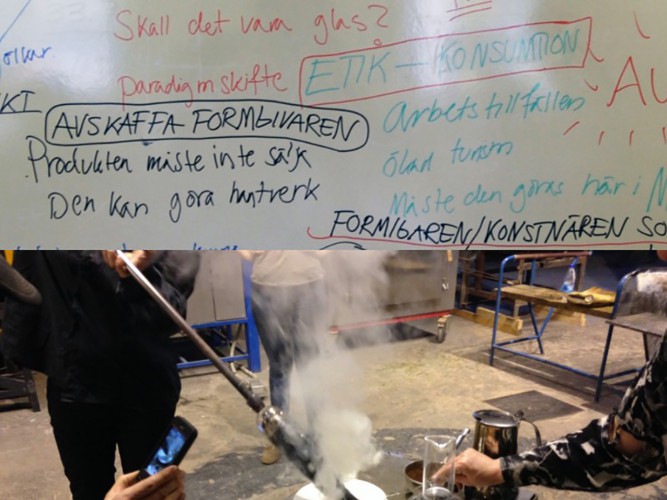 Glass never solidifies – it is a moving mass. Massa i rörelse (Moving Mass) explores glass as an idea, history, commodity and production: an industry and human interdependence as the basis for a societal construction.

In Moving Mass, six Swedish artists have explored ”Glasriket” (the Kingdom of Crystal in southern Sweden) with a departure point in the local and global societal change. Which has been the significance of glass, and how it is to live in Glasriket when most of the production has been moved abroad? Has the labor immigration’s contribution to the glass industry’s success been made invisible? How is the loss and transformation of work, identity and solidarity being handled and portrayed?

The exhibition at Kalmar konstmuseum is part of a longer process with various activities. The project is an initiative of the artist Ingela Johansson, who invited artists Eva Arnqvist, Johanna Gustafsson Fürst, Åsa Jungnelius, Caroline Mårtensson and Malin Pettersson Öberg. In dialogue with the place and the people who were and still are dependent on glass as a handicraft and industry, the artists treat and portray the transformation of the Swedish glass production, as an example of a society in transition.

During the exhibition, a series of conversations will take place starting out in the various works. On 18-19 February 2016 Kalmar konstmuseum and curator Lisa Rosendahl will be organising an international conference on the theme of how to portray societal change. In August 2016 a second part of the conference will be organised, in collaboration with the project RESIDENCE IN NATURE.

Still from ”Att läsa glaset” where we see glass by Elis Bergh from the 1930’s.

For the occasion, Malin Pettersson Öberg has developed the new film Att läsa glaset (Reading Glass), in which she explores glass as a concept and association surface with a departure point in the art glass collection that Emmaboda municipality purchased in 2009 and around which the museum of The Glass Factory in Boda has been built. In glimpses from a single take filmed with a moving camera, we follow tableware and art glass stored on the shelves of the archive. The glass is designed by artists such as Elis Bergh, Hertha Hillfon, Erik Höglund and Monica Backström and together with a reading of quotes and notes on glass and its history, as well as a musical interpretation made by Samuel Nicolas, we are submerged into an audiovisual flow.

In equal parts document and subjective reflection, Pettersson Öberg wishes to raise questions about the significance of glass for the idea of Sweden as well as for our general understanding of the world and ourselves. The film points to the inherent difficulties in vision and interpretation, and asks what role technology and science has played in our perception of the ourselves and our surroundings? Concepts such as vision, collecting and origin are enquired and faced with terms such as control, segregation and homogeneity; often used to describe glass manufacturing. The impossibility of objectively depicting a place or a historic event, or for that matter, the experience of loss and disappearance, gives rise to the suspended and floating character of the film. What is selected and rescued, who tells what to whom? The camera is an equivalent of the eye, in a movement across the room, in which the glass is read by a continuously changing lens.

Att läsa glaset (Reading Glass) has been produced in dialogue with The Glass Factory and the artists in the collaboration Moving Mass, as well as with the support of the Swedish Arts Council, the Swedish Arts Grants Committee and Kalmar Art Museum. The video has implied collaborations with Samuel Nicolas, music and sound, Axel Diedrichs, camera and lights, Nils Fridén, postproduction, and William Jewson, translation. The process has implied valuable meetings and conversations with, among others, journalist Agneta Gustavsson, glass antiquarian Gunnel Holmér, visual artist and former glass engraver Åke Bergqvist, glass artist and designer Monica Backström, and Emma Karlsson, head of collections and documentation in Boda.

More information about the project Massa i rörelse (Moving Mass),
which can also be found on the website of Kalmar konstmuseum:

”The national identity connected to glass has its roots in an area described as ”The Kingdom of Crystal” in Småland in southern Sweden. The Kingdom of Crystal is marketed as a living industrial region. However, both the Åfors and Orrefors Glassworks has recently been closed and much of the production today takes place abroad. What will be the new sense of community in the region when the glassworks are closed down? Is it possible to gather around a concept that has not yet received a content grounded in reality? How is it to continue living in the glassworks environment when most of the activity has been shut down and the production moved abroad? How does this affect the individual human being and what does it do to the regional identity? To discuss issues such as these on site in the Kingdom of Crystal is one important aim of the project, implemented by the creation of forums for exchange of ideas and thoughts on glass as a cultural heritage and the history thereof.”

Moving Mass has enabled residencies and workshops at various locations in the region. Except for the exhibition at Kalmar konstmuseum 5 December 2015 – 28 February 2016, an adjoining conference 18-19 February 2016 will be organised in collaboration with Lisa Rosendahl, on the theme of how artistic practices relates to issues of societal change. The project is carried out in dialogue with Kalmar konstmuseum, The Glass Factory and The Design Archive Pukeberg and it is supported by the Swedish Arts Council, the Swedish Arts Grants Committee and Nybro Municipality.